The Original Tree Huggers: Let Us Not Forget Their Sacrifice On Earth Day 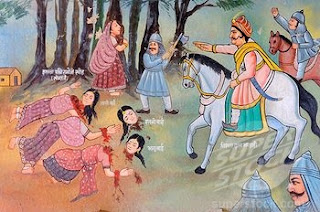 Nearly 280 years ago, the sacrifice of a brave woman, Amrita Devi, would have ripple effects in one of India’s most vibrant environmental movements called the Chipko Andolan in the 1970s.  Amrita Devi belonged to the Bishnoi community that is known for its great love for conservation.  The Bishnoi faith respects the sanctity and sacredness of all forms of life and their tenets include prohibition on killing animals and felling of green trees. Bishnois also worship the Khejri tree, Prosopis cineraria, considered a critical life force in these desert communities.

As the story goes, the King of Jodhpur sent his soldiers to the Bishnois villages to cut green trees to build his new palace. As the soldiers began cutting the Khejri trees with their axes, Amrita Devi, a Bishnoi woman, ran to stop the felling.  She hugged a Khejri tree to protect it from the blows and begged them to stop.  The soldiers asked her for a bribe to stop the cutting; Amrita Devi was unmoved and told them that it was an insult to her faith to offer a bribe.  The soldiers took to violence and struck her with an axe. When her three daughters witnessed the brutality, they rushed and hugged the trees as well and were also killed by the soldiers.  Soon the word spread like fire around the village of Khejarli and others joined in, hugging trees in a nonviolent protest.  The soldiers continued to mercilessly kill people, both young and old, and the massacre led to the sacrifice of nearly 363 Bishnois, who died protecting their beloved sacred tree.
When the king learned about the carnage, he was repentant and forbade any killing of animals and cutting of trees in the Bishnois territories.  Even to this day, one can spot the endangered Black Buck, peacocks and other wild life and tree cover where the Bishnois communities live in Rajasthan.  It is no wonder that the Bishnois are considered as among the earliest conservationists in the world.

“Soil is ours. Water is ours. Ours are these forests. Our forefathers raised them. It’s we who must protect them.” A song from the Chipko Movement in India

The Chipko Movement is a great example of a Gandhian movement that was based on nonviolent principles of satyagraha. Chipko means to hug, and this movement is synonymous with the enduring images of rural women hugging their community trees to stop rampant deforestation.  In the Garhwal Himalayan region of Uttarakhand in the 70s, there was rapid environmental degradation due to commercial logging. It became clear, especially to women, that logging was destroying their forests and threatening their access to key forest resources needed for their daily sustenance.


Soon villagers began organizing themselves in small groups to organize against logging.  A pioneering Gandhian grassroots activist, Chandi Prasad Bhatt, mobilized communities to stop the destruction of the forests. He was joined by hundreds of women, who were on the front lines of the resistance—marching and rallying to protect their community forests and formed human chains to hug towering old growth trees. This kind of environmentalism was inherently linked to their survival; the women recognized that their livelihoods and wellbeing were intertwined with ecological protection.

“This movement of the poor women was not a conservation movement per se, but a movement to demand the rights of local communities over their local resources. The women wanted the first right over the trees, which they said were the basis for their daily survival. Their movement explained to the people of India, that not poverty, but extractive and exploitative economies were the biggest polluter,” writes Sunita Narain, director of Center for Science and Environmental in New Delhi. The impact of the Chipko movement had spread far and wide beyond the state of Uttarakhand and led to the government issuing a ban on felling of trees for 15 years until the green cover depleted by deforestation was restored. And the legacy of tree hugging continues to this day, as do the challenges for people's access to community forests and threats from ongoing forest degradation.

“Forest is Our Mother. Our life sustains on her.
Our spirituality is tied to the trees.”
An adivasi woman from Jharkhand Save the Forest Movement

A few months ago, I had the privilege of meeting a group of adivasi (indigenous) women in the state of Jharkhand, who are mobilizing their communities to protect their forests, as well as educating others on their rights over natural resources.  Jharkhand, meaning the land of forests, has seen some of the most vibrant people’s movements to protect forests and lands from mining and other extractive  activities.  An adivasi woman, Suryamani Bhagat, has been on the forefront of the Jungle Bachao Andolan, Save the Forest Movement, in her state.

During a conversation with Suryamani and other adivasi women from the movement, I learned how they are deeply connected to the forest. “Forest is our Mother. Our life sustains on her and our spirituality is tied to the trees,” said Suman Munda, a young tribal woman and forest activist.  Over the past many years, adivasi women and men have joined hands to reclaim their rights over their community forests; the have created forest watch committees to ensure there is no illegal cutting of the trees, and they are raising awareness on the Forest Rights Act passed in 2006 to enable forest dwelling communities to access resources that have been denied to them as a result of the continuation of oppressive colonial forest laws.

“At first there were many injustices against adivasis. People used to think forests belonged to the forest department and some adivasis were jailed and beaten for using the forest produce. We realized that we needed to organize and assert our rights and protect our jungles,” she says.  Suryamani also shared that the forest department would promote monoculture plantations of Eucalyptus and Acacia varieties in their rich, diverse jungles that had little to no value for adivasis, who relied on indigenous trees like Sal, Mahua and Amla for their foods, medicines and rituals.

In India, mining, hydroelectric and nuclear power projects, industries, among others, are displacing thousands of farmers, fisher folks, pastoralists, artisans and indigenous people from their homelands.  Historian, Ramachandra Guha notes how the environmental movement in India arose out of the imperative of human survival. “This was environmentalism of the poor,” he wrote. This  “empty-belly environmentalism,” where women and girls in India, undoubtedly the poorest, who are most acutely affected by hunger because of the multi-faceted discrimination they face, find themselves on the frontlines of many people’s movements against land and other resource grabs, not out of choice but from the sheer will to protect their livelihoods and dignity, their identity and culture.

From the brave sacrifice of one Bishnoi woman to the long movement building of women of the Chipko Movement to the ongoing struggles of adivasi women in the Save the Forest Movement in Jharkhand—they all exemplify why it is crucial for women to have equal access and control over natural resources. Environmental movements globally can learn from these bold uprisings of women and make greater commitments to build more diverse and inclusive movements to ensure that indigenous women and women of color are active participants in these struggles and are able to share their vital experiences and perspectives on environmental protection.

As I was said goodbye to Suryamani in her village in Jharkhand, I asked her what changes she had noticed in the forests since the Save the Jungle Movement began. “Our forests are regenerating, she said.  "The birds and animals are returning, and we also spotted a leopard." I also wondered what the mainstream urban community could learn from the mobilizations of adivasi communities in Jharkhand. “Our life is bound with Nature. You can learn from that,” she said.

Our blog is a collection of inspiration, information and ideas about the work we do and the lives we lead.

Today we joyfully invite you to contribute in making certain that the crucial work of women who are advocating for environmental and social change will not only continue, but will grow with every passing year.

Click here or visit PayPal to support us financially.